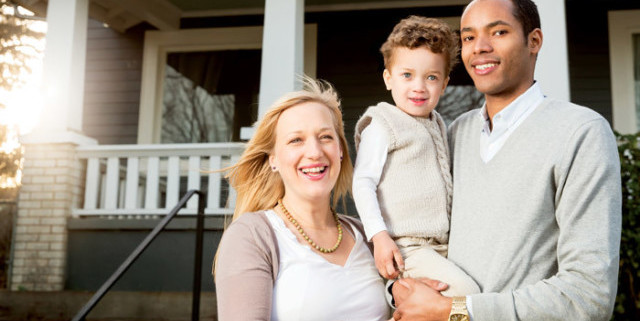 Image: Leah Nash
Landy and Sophia in front of their North Portland home.

Consider the maximally mobile 21st-century human, the person who could pretty much live anywhere. Landry Molimbi, for example. Born in France, the 31-year-old handles Western Hemisphere business development for a Cologne-based energy technology company. He studied in Barcelona. About a decade ago, he and his wife, Sophia, moved from Paris to New York—because, essentially, the world is his workplace.

Two years ago, with a child on the horizon, Landry and Sophia, an actor, picked a new spot on the map: Portland. (She was born here but had lived abroad since childhood.) They decided North Portland offered the connections and amenities they needed, along with qualities supercities could not. “It’s definitely easier here with kids than in Paris or New York,” Molimbi says. “And the property process is easier and quicker. You have remodeling flexibility that would be hard to find in an apartment or dealing with a co-op board. And the quality of life can be high.”

Such Portlandian characteristics—affordable square footage, check; walkable coffee shop, check; international airport, check!—are beginning to wield far-flung appeal. “We left America with two suitcases,” says Brent Gregston, a freelance journalist. “We came back with two boys.” After 18 years in Paris and Amsterdam, Gregston and his architect wife see Portland’s familiar charms through an international lens. “Cities coming into their own are more accessible,” he says. “Paris has had the most dramatic property rise since the war. San Francisco—we almost couldn’t contemplate it. It’s a tough scene. In Portland, you can do much of what you can do in those cities in a more realistic way.”

No one would mistake Portland for London or New York, where whole neighborhoods have become ghostly repositories for billionaires’ equity. “If Seattle is second-tier as a destination,” says Kathleen O’Donnell, a real estate broker who attained a rare international-sales certification to cultivate a global clientele, “Portland is third-tier.” But for some, that’s the point. “It’s the Portland version of that classic American dream—people want that Craftsman in Alameda or a Tudor in Portland Heights.”

For Gregston, a veteran of Radio France International, magazines, and various nonprofits, Sellwood oddly echoes his old suburban-Parisian village. “We were on the Seine,” he says. “Here, we have Oaks Bottom and the Willamette. Our town had an alternative scene and organic shops. Here, I can walk to an old movie theater. It’s a civilized, livable place.”

Isler Northwest LLC is a firm of certified public accountants and business advisors based in Portland, Oregon. Our local, regional, and global resources, our expertise, and our emphasis on innovative solutions and continuity bbm androidcreate value for our clients. Our service goal at Isler NW is to earn our clients’ trust in us as their primary business and financial advisors.

The Problem With Secular Stagnation