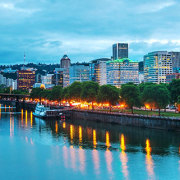 Halfway through his term Portland’s mayor reflects on the city’s rising skyline, an urban world, and the city’s greatest challenge.

Elected amid 2012’s postrecession hangover, Mayor Charlie Hales now presides over an urban boom that powers the nation’s second-fastest growing economy. (Only oil-rich North Dakota grew faster than Oregon over the past decade; the Portland metro area makes up three-quarters of the state’s economy.) What does success mean for a city long proud of its quirk and affordability? In an interview edited for concision and clarity, His Honor looks to the future:

What are you excited about for 2015?
We get to turn, after two years, from repair work to forward motion. Economically, the city is in a very good place. When I ran for office, the only tower cranes in the city were on public projects. Now, there are a dozen or more on the horizon, mostly for private projects. That’s a huge change—and it’s not a bubble, it’s real growth. People are coming to Portland because of quality of place and opportunity.

But do you sense any unease about that growth?
Absolutely. We’re attracting all this economic growth, but is that prosperity shared? The Washington Post did a story: “Why Portland grows its own Swiss chard and steals your college graduates.” OK, that’s fun. But instead of stealing other people’s college graduates, what about kids at David Douglas or Parkrose becoming software designers and staying in town? Economic development needs to be more than “Rah, rah, more growth, yay.” It needs to be about connecting our education system to that development.

How do we succeed as a city but avoid becoming, say, San Francisco?
The world is moving to cities—here, too. And that creates competition for very scarce real estate. Portland isn’t going to physically grow. Neither is San Francisco. Neither is Vancouver, BC. A lot of cities are in that situation. In five or 10 years, will young professionals even be able to buy houses here, let alone the family that moves here from Somalia or Schenectady and gets a solid job? We earmarked $20 million in funding for the Martin Luther King Boulevard corridor for affordable housing—nowhere near enough, but hopefully it leverages more.

END_OF_DOCUMENT_TOKEN_TO_BE_REPLACED 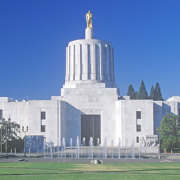 Portland city government expects to have $19 million in additional revenue for the next fiscal year — $4.6 million of ongoing revenue and $14.4 million in one-time revenue.

The revenue forecast was released by the City Budget Office on Friday. It said the surplus is the second in two years, and is because the economy is finally growing at levels normally seen during economic expansions. END_OF_DOCUMENT_TOKEN_TO_BE_REPLACED