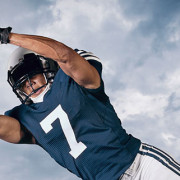 A record 114.4 million people watched the New England Patriots defeat the Seattle Seahawks in the Super Bowl on Sunday, the largest audience for a U.S. television program in history, according to preliminary figures from Nielsen.

NBC’s telecast of Super Bowl XLIX, a nail-biter that the Patriots won 28-24 on a last-minute interception, topped the old record of 112.2 million set last year by Fox’s coverage of the Seahawks easy victory over the Denver Broncos.

This was the seventh straight Super Bowl that drew over 100 million viewers and the fourth in five years to set a new viewing record.

Advertisers shelled out as much as $4.5 million for a 30-second spot in the game, also a record.